Inferno tells of the presence in iconography and thought of the concept of hell and damnation from the Middle Ages to the present day. Accompanied by the Dante word, visitors will cross the terrifying places and lacerating visions of Hell as they have been represented by artists of all eras: from the schematic medieval scenes to the sublime Renaissance and Baroque inventions, from the tormented romantic visions to the merciless psychoanalytic interpretations. of the twentieth century.

THE WORKS ON EXHIBITION

The exhibition itinerary, created by Francesca Ercole, Architect in charge of the Technical and Design Office of the Scuderie del Quirinale, will unfold through more than two hundred works of art on loan from over eighty large museums, public collections and prestigious private collections from, as well as from Italy and the Vatican, from France, the United Kingdom, Germany, Spain, Portugal, Belgium, Switzerland, Luxembourg, Bulgaria. Among the masterpieces, works by Beato Angelico, Botticelli, Bosch, Bruegel, Goya, Manet, Delacroix, Rodin, Cezanne, von Stuck, Balla, Dix, Taslitzky, Richter, Kiefer.

Francesco Murano, today one of the most sought-after Italian lighting designers at the service of art and author of the lights of the most important exhibitions in Italy, is responsible for the lighting of the works on display. "Visiting the exhibition is a perfect way, I would say almost unique, to" experience "Dante Alighieri's masterpiece - declares Murano - Despite my secular and non-confessional culture, spending days and days among devils and demons has affected my attitude in confrontations of the occult. I cannot hide the fact that I had some nocturnal disturbances, especially with regard to some works that presented sin in the guise of women. One of these paintings is undoubtedly "Myrrha" by Loewe-Marchand, where the incestuous protagonist is portrayed with a phenomenal, almost hyper-realistic modernity and technique. A work that I did not know and that captivated me: it is truly incredible that it was painted in 1892 ".

HOW TO ILLUMINATE THE DEMONS OF "INFERNO"

From a lighting point of view, a complex and encyclopedic exhibition such as "Inferno" presents considerable problems: for the importance of the many masterpieces of art, for the contemporary presence of works belonging to different eras and, above all, for the size of the works on display, ranging from oil paintings such as "Dante and Virgil in the ninth circle of Hell" by Gustave Doré (more than three meters by four) to small pencil drawings on paper such as those by Paul Richer, from precious parchments such as the representation of Botticelli's Inferno to the thousands of microsculptures of corpses composed in a pyramid by the Chapman brothers.

"Throughout the exhibition basically two types of luminaires were used - explains the architect - The shapers for the works that I decided to delimit and surround with a precise light and the AR111s for those that seemed to me to need more light. widespread and less circumscribed. All the works were illuminated with a warm light and a lot of attention was paid to reflections, especially with the large paintings executed with the oil technique on canvas or on a table with a dark background, real "black mirrors" that were enhanced with side lights and never front ones ".

Hours: From 1 November new timetables: every day from 9 to 20 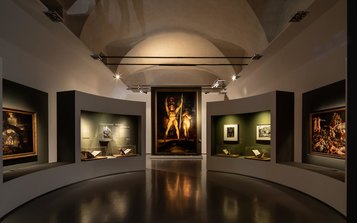 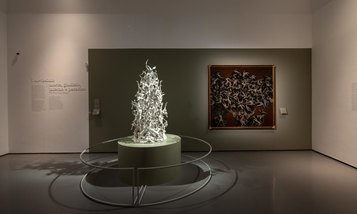