At the Mart in Rovereto, the first exhibition dedicated to the influence that Raffaello Sanzio had on the major protagonists of the twentieth century: Picasso, de Chirico and Dalí. Coming from some of the most important international museums, such as the Uffizi Galleries, the Musée national Picasso in Paris and the Fundació Gala-Salvador Dalí in Figueres, 100 masterpieces make up a path in which ancient and modern, once again, interact.

It is a timeless art that goes beyond chronological limits and goes beyond academic definitions that Vittorio Sgarbi proposes at the Mart. Announced at the beginning of his mandate, in the spring of 2019, the President's design is that of a museum that deals with art, not with ideological limitations. In Rovereto, "classical and modern masters interact with each other and with the works of one of the richest public collections in Europe. The Mart schedule spans the centuries ".
This exhibition proposal is consistent with the original vocation of the Rovereto museum, inaugurated for almost 20 years. The same architectural forms recall classicism, starting with the homage to the Pantheon in Rome declared by Mario Botta in the conception of the now iconic dome. If already in 2013 the Mart combined the work of Antonello da Messina with the most recent portraiture, the Caravaggio exhibition took place last autumn. The contemporary who put one of the seventeenth-century Maestro's most dramatic paintings into dialogue with two fundamental figures of the twentieth century: the artist Alberto Burri and the poet Pier Paolo Pasolini.

The investigation continues, from May 2 to August 29, 2021, with a new major exhibition: Picasso, de Chirico and Dalí. Dialogue with Raphael: an unpublished and in-depth study on the way in which the art of Urbinate influenced the research of the three great masters of the twentieth century. Curated by Beatrice Avanzi and Victoria Noel-Johnson, the project emphasizes the visual dialogue not only between Raphael and the three artists of the twentieth century, but also between the artists themselves. If everyone studied classical art and were fascinated by it, the reinterpretation was totally different: de Chirico's relationship with Raphael, for example, was cultured and systematic, that of Picasso more immediate and irreverent, finally Dalí will always look to the master with profound admiration, aspiring to become "the Raphael of the twentieth century". The three aesthetic repertoires were, therefore, deeply individual.

At the Mart over 100 works offer different variations of Raphael's aesthetics, of which the famous self-portrait from the Uffizi Galleries is exhibited. The 500th anniversary of his death, which has just ended, is an opportunity for a reinterpretation of the influence exercised by Urbinate on Pablo Picasso, Giorgio de Chirico, Salvador Dalí. Although in a completely independent way, the three artists were inspired by the lesson of the Renaissance master whose work they studied, quoted and interpreted, an essential example in the search for grace, balance and renewed classicism.
If in the years of the return to order many European artists drew on the example of the old masters, the three protagonists of the exhibition "sought" Raphael throughout their long careers. As before them happened to numerous artists including Jean-Auguste-Dominique Ingres, of whom the exhibition presents some works, that for Raphael was a constant passion.
As the curator Beatrice Avanzi illustrates in the catalog accompanying the exhibition, "Raphael's work, and life itself, have been crystallized in a myth nourished by seduction and unanimous consent [...] the very fact that the greatest artists of the century interpret of his most revolutionary instances, have found a constant point of reference in the work of the 'divine painter' is an eloquent testimony of a magisterium that appears today, in our eyes, to be eternal ”.

If de Chirico openly manifested his admiration for Urbinate, which he studied and copied, considering it a reference for the elaboration of metaphysical poetics and for the subsequent classicist season, also Dalí made no secret of his consideration for the master, a myth to which he looked at since his youth and which, after World War II, suggested extraordinary reworkings, leading him to declare: “Long live modern art on condition that you paint like Raphael”.

Picasso, on the contrary, never confessed his direct encounter with the master's work; however the latter appears at the origin of some of his masterpieces and inspired him with an irreverent series of etchings on the theme of Raffello and Fornarina. Precisely in reference to the cubist painter, it is the intuition of the curator Victoria Noel-Johnson that two of his most successful and well-known masterpieces, Parade and Guernica, contain precise quotes from the example of Raphael.

The exhibition unfolds through 8 thematic sections: Dialogue between masters, Raphael's eternal magisterium, Sacred and profane maternity, The ideal space, La Fornarina. A timeless beauty, Picasso. The irreverent look, Dalí. A long daydream, De Chirico. A sudden revelation.
From the very beginning, the Raphaelesque stylistic features are identified in the figurative repertoire of the three painters, from the ideal and enigmatic space of the Italian Squares by de Chirico, inspired by that of Raphael's Marriage of the Virgin, to the precise references present in Dalí's painting; up to the fascination, analyzed for the first time, that the frescoes in the Vatican Rooms exerted on Picasso's work.
Spanning the centuries, the exhibition offers numerous combinations and references. There is also a famous copy of La Fornarina attributed to Raffaellino del Colle, a pupil of Raphael, from which a rich gallery of extraordinary female portraits begins, including Seated Woman, by Pablo Picasso and Autumn, by Giorgio de Chirico.

The last three sections of the exhibition explore each artist's relationship with Raphael's art. In addition to paintings and drawings, a rich set of documents and books on Raphael is exhibited: real sources of inspiration owned by the three modern artists.

The artistic direction of the exhibition is Contemplazioni.

The exhibition is accompanied by a rich catalog published by Silvana Editoriale which contains, in addition to the essays by the curators Beatrice Avanzi and Victoria Noel-Johnson, the texts by Vittorio Sgarbi, Daniela Ferrari and Lucia Moni.

The exhibition Picasso, de Chirico, Dalí. Dialogue with Raphael continues in the in-depth Focus dedicated to Wainer Vaccari (Modena, 1949). Raphael's timeless legacy lives on in the painting of this contemporary artist, in an evocative link between the Renaissance and the twenty-first century.

Vaccari reinterprets Raphael's Spasimo di Sicilia, creating an evocative link between the Renaissance master and contemporaneity. The artist recreates in a current vision the great work created by Urbinate in 1517, originally commissioned for the monastery of Santa Maria dello Spasimo in Palermo and today, after an adventurous story, preserved in the Prado Museum in Madrid.
Through the language of Vaccari, which welcomes suggestions of the New German Objectivity and Mannerism, the scene of the Go to Calvary becomes the universal image of a pain that spans the centuries.

A virtuoso of painting, capable of dealing with the ancient way, Vaccari also brings to life and actual a painting by Raphael now lost, The Portrait of a Young Man (1513-14), already preserved in the Museum of Krakow, where it was stolen by the Nazis in 1945 The eternal greatness of the master Urbinate thus relives in the present time. 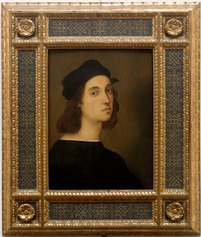 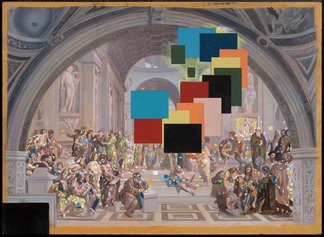 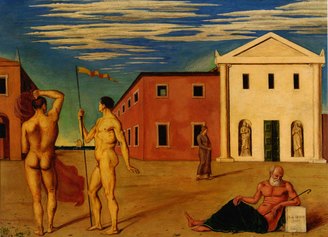 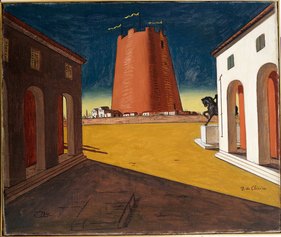 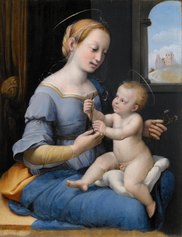