With the opportunity of Milan's Photofestival, the Manifiesto Blanco gallery chooses to unveil an unprecedented, site-specific photography project from Pierrick Gaumé. This project, named Milano Shakerata, is dedicated to the city of Milan and based on the photographer's concept of automorphoses — from the ancient Greek term Autós, i.e. itself, and the term Mórphôsis, i.e. taking shape.
In this series of images, some people could see photographs of cars or photographs that show reflections of Milan's architecture, distorted on automotive bodywork surfaces. However, these images also show reflections with irregular characteristics in the various planes, curvilinear and aerodynamic volumes that convey an unusual representation of the space surrounding them. Consequently, these planes and lines unavoidably define — if not redefine — inverted and distorted visions of urban space. Twisted city elements, fragmented with structural lines, sometimes generate an outbreak of shapes. Their many facets can be discovered as the Milano Shakerata series unfolds. Thereafter, scattered or orderly highlights and colour blocks emerge on various levels, sometimes with a focal point that rises up and looks as ardent as a fireburst.
As a whole, these photographic images from Pierrick Gaumé offer a dynamic perception of the interpenetration between volumes of objects and their physical environment. Focusing on this interpenetration relationship can recall works of the Cubist movement in its analytical phase, but also some from Italian Futurism. Existing signs of urban reality look both articulated and unknotted, both deconstructed and remixed by distorting mirror-objects in a “surreal” vision that is purely visual. Embraced and observed by the author, this optical phenomenon enables him to capture the reality of transformation in shapes, lights and colours that offer the new vision of a graphically-recomposed urban space.
Since Gaumé rules out to retouch his automorphoses, one can confirm these photographs do not result from a mental or intellectualised reconstruction of reality. In other words, they are as real as reality is.

Pierrick Gaumé is a French graphic designer and visual artist who earned an Industrial Design Masters Degree from the École Nationale Supérieure de Création Industrielle (Paris, 1995). His drawings, paintings, collages and photographs started being part of private art collections in 1994. Between 1997 and 2011, Gaumé's works were mostly shown in Paris, in Tel-Aviv and in San Francisco. In 2006, after working for years as an Art Director in Tel-Aviv, Gaumé came up with a new photography concept he named Automorphoses. For the fifteen years ahead, this concept became his trademark and opened doors to new collaborations, such as the 2013 Automorphoses exhibit in Peugeot's Headquarters in Paris. To this day, Automorphoses are the largest and most documented corpus within Gaumé's artwork. However, along with cars that tend to be banned from city centres, Gaumé likes to describe his Automorphoses as "city icebergs". After all, both cars and icebergs have shiny surfaces and inexorably get to disappear. As a matter of fact, Gaumé's Automorphoses can no longer be captured in countless newly-restricted urban areas. Therefore, their uniqueness and rarity is bound to grow as time goes by.

3 OPENING DAYS on September 23, 24 and 25 from 4 to 8 p.m.
also offer the possibility to meet the artist.
For these opening days, admission is still free but has to be booked in advance on the gallery's website, www.manifiestoblanco.com 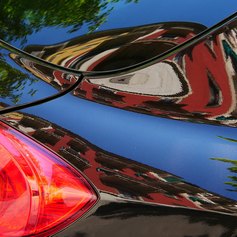 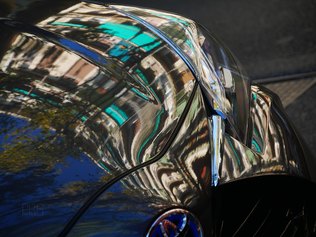 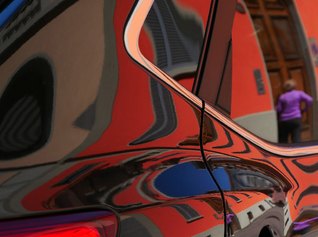