Palazzo Roverella in Rovigo pays tribute to Robert Doisneau, the great master of photography, through an original exhibition, capable of revealing to the public works whose vocation is to capture moments of happiness such as his famous shot of the kiss, which immortalized a young couple , indifferent to the crowd of passers-by and the traffic of the place de l'Hôtel de Ville in Paris.

Along with Henri Cartier-Bresson, Doisneau is considered one of the founding fathers of French humanist photography and street photojournalism. With his objective he captures the daily life of the men and women who populate Paris and its banlieue, with all the emotions of the gestures and situations in which they are engaged.
This exhibition at Palazzo Roverella embraces his work without chronological distinctions or any criteria of genre or theme, alongside factories, bistro counters, concierge, ceremonies, jazz clubs, schools or street scenes in general. Whether they are photographs made on commission or the result of his free wandering in Paris, we see a style imbued with a particular mindset, which is also reflected in his writings and in the captions of the photos; a style that mixes charm and fantasy, but also a freedom of expression not far from surrealism. If the style is the man (as Buffon says), in the same way the photograph identifies itself with some of his subjects to express a sort of restlessness or melancholy.
A story - the one proposed by the curator of this exhibition, Gabriel Bauret - conducted through 130 black and white silver salt prints, from the collection of the Atelier Robert Doisneau in Montrouge. It is in this atelier that the photographer printed and archived his images of him for over fifty years, and it was there that he died in 1994, leaving a legacy of almost 450,000 negatives.
Doisneau's is a light, ironic story that winks at people with sympathy. Which even becomes tenderly involved when he photographs lovers and children.

Doisneau was born in 1912 in the Parisian suburb of Gentilly. His training as a photographer was born from an apprenticeship in the laboratory of an advertising photographer. But his attention soon moved to the popular districts of Paris and the banlieue, images that began to appear in magazines through the Rapho agency, of which he is one of the most important members. Then
the war pushes him to make himself available to the resistance to give a new identity to the wanted people. After the Liberation, here are some reportages for "Vogue" and in '49 the book created in collaboration with his companion, the famous writer Blaise Cendrars, La Banlieue de Paris, the first synthesis of the many stories in images that he will dedicate to this world. Doisneau describes his everyday life, composing a visual story in which a deep humanity and a note of humor are mixed, always present in his work. 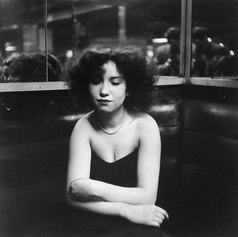 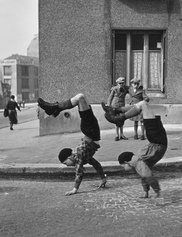